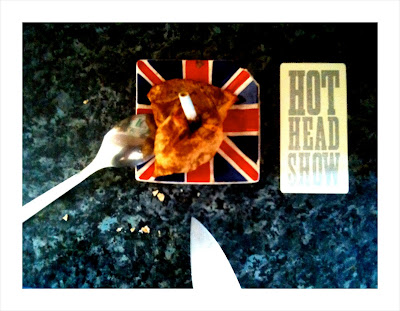 Posted by HOTHEADSHOW at 07:42 No comments:

The soiled remnants of a party above an auto shop, deep into a January night in Clapton.

Posted by HOTHEADSHOW at 10:40 No comments:

This week, my word - for the first time in the history of Hot Head Show, our drummer showed up at Headquarters proclaiming that a song had been written and that he himself had written it.  He tried to explain his concept for the tune, which made no sense at all.  But knowing the boy to be a better drummer than he is an explainer, the recording machine was wheeled into the room, and Betamax laid down first a guitar part, then the drums.

It needs a little work, but is going to be very banging indeed.  This is one of five new tunes now being whittled lovingly in a basement in Dalston, splurges of which are bound to end up on here over the next few weeks.  And I'm pretty sure I've got a new batch of live videos knocking around here somewhere.
Posted by HOTHEADSHOW at 13:57 No comments: