WISE AND PROFOUNDLY DISCERNING COMRADES:
Until fairly recently, after feverish weeks of fist-biting, we had been looking forward to announcing a string of UK Showtimes scheduled for the first half of December. However, the Universe has seen to it that instead we will today announce our principal vocalist's deployment to the People's Republic of China, his prowess in the field of short-form video propaganda having been procured at considerable expense by a coalition of property tycoons evidently hell-bent on becoming even more prosperous than they already are. It has therefore, and not without considerable consideration, been deemed necessary to wipe clean Hot Head Show's calendar of public appearances for what remains of 2011. The vocalist responsible wrestled bravely with muscular torrents of regret, right up until the evening his (and your) drummer disembarked unexpectedly from a bicycle unto the moist yet unforgiving concrete of a Hackney Wick side-street, grazing half his face and fracturing one of the elbows that would have been critical to any attempt made by HHS to perform any of their popular entertainments between now and the New Year.
In the mean time, one might be forgiven for presuming general operations to be at a standstill here at Hotheadquarters, but this is true only of certain periods of each day. Our primary THRUST at the moment is, you should be delighted to learn, ALBUM NUMBER TWO - an enterprise which can be considered overwhelmingly positive in every implication other than the cruel flagrancy of its shitting so heartily on the head of album number one. Behold:
It's an exciting time to be a human being, boys and girls. Don't touch that dial.
The other matter to clear up once and for all is the current situation with HOT HEAD SHOW's performative personnel. There has been much misguided speculation - the truth is, after Vaughn Stokes tragically was eaten by a horse at the end of the summer, amid the ensuing torrent of talented bass players practically and sometimes literally wrestling for our attention, we happened to receive word of the potentially imminent return of MR JONAH BRODY from his two year exile on the other side of the world. In the time immediately before Vaughn Stokes decided to leave high school in Canada to join everyone's favourite desperately obscure Bang Bang trio in East London, the bass player in that trio had been Mr Jonah Brody. In fact, many of the low-frequency vibrations that rumble your booty every time the Lemon LP comes on started life as tiny funky frictions between the strings of a semi-acoustic Epiphone and the gnarled fingertips of Mr Jonah Brody. That piano soliloquy that closes the LP? Mr Jonah Brody. You may have heard word of our sister company and yang to HHS's yin - SUPER BEST FRIENDS CLUB: the tall thin frontman of that strange outfit, known for grease-painted spiritual outpourings and spontaneous flailing dance-floor invasions, is in fact none other than Mr Jonah Brody. IN ADDITION to Mr Jonah Brody's peerless credentials as Transcendent Mystic, he happens to be a RINSING bass player. We took him for a spin at the Bedroom Bar and he rinsed the house down. If you happen to have missed that particular Showtime due to your sister's birthday party or whatever, it seems you will now have to wait until January - we have an album to finish and a mission-critical elbow to heal.
But 2012 is going to be one helluva year, oh boy - we have two Video Entertainments currently in post-production, one detailing our rancid misadventures on the road with Primus, and the other detailing something else. You will probably end up watching each of them several times. Two London shows and a UK tour will happen in Feb/Mar, and Mainland Europe will be getting it's piece in the Spring, with Showtimes currently in the works for Hamburg, Berlin, Roma, Milano, Perugia, Warsaw, and your sister's university. Should YOU have an additional Showtime to suggest to the Show, the place to do that is hello@tentaclefilms.com
If by some tragic miracle you don't already own The Lemon LP, you might want to consider buying it here:
http://hotheadshow.bandcamp.com/album/the-lemon-lp
Lastly - the gentlemen central to our operation, those three young spiceboys insistently referring to themselves as Hot Head Show, have asked that I invoke the great horn-arranger of the universe in hoping, whatever the coldest/cosiest months of the year mean to you, that they don't fail to deliver this time round, but also to remind everyone that for most of us, there's always next year.
Much love,
Randolph T. Jackson
VP Public Relations
Bureau of Affairs
Tentacle Entertainments
Posted by HOTHEADSHOW at 03:44 No comments:

The Unbearable Lightness of Bang - Live in Vigevano

Posted by HOTHEADSHOW at 03:40 No comments:

Posted by HOTHEADSHOW at 03:30 No comments:

HOT HEAD SHOW - The Lemon LP
There are those who live and who rejoices in the excess of reflection, who goes to school in style and those who copy the style if the task as a class, are not sophistry low market, but it is the finding of complicity and how alive the 'need to have all the costs need to be heroic or erotic "like" better "than" and stronger than "that other", to resemble in all respects to "the body and inspiring "in all shapes and sauces, the Hot Head Show , British band - which militates Jordan, son of the famous Stewart Copeland - dedicated to surrealism acrobatic funk-blues version of the Isosceles, if this n'escono The Lemon LP , eleven asymmetric traces that seem alive and silver extracted in robbery Ballardian band Les Claypool , Primus, and imprinting is a total and dehumanizing of this training, but it does not seem to bother Clay Boss, indeed, is something enthusiastic so that if you aggregate them behind in a never-ending tour.

Jordan Copeland on guitar, Beatamax on drums and Vaughn Strokes are the devil down to four as a duty and mission to headbang-blooded masses of stinging Funkettomani spring with their jerky rhythms - never wave - that puts fire in the adrenal veins, rowdy, Technical and anarchists, epic, cross, and so crooked caciaroni distant from schizophrenia resurrect Zappa , the HHS invest all their white-hot in a vacuum gigionesco toss the balance in a stereo tracking epileptic extensions and retreats of the blood that makes you fat, a vein of eccentricity that gulps down everything psychedelic, funk, Kiedis of Red Hot Chili Peppers , guitars and wah wah increased in the seventh, the nineties and the prancing circus sprogrammato of G Love & Special Sauce, microparticles of diseases vaudevilliane Waitsiane and here and there - such as waste production - clippings Police and Soul Coughing , in short, a food that crosses with wild-eyed look and all the essential steps and progression of skill that only the champion - even if the skin super scripts - know how to baste.

Certainly not fail to to break - between the eaters of those imperfections to hammer sound - the exciting Latin-funk robotic commingling the Talking Heads ( " Bummer " ), the oddities of cacophonous crazy-clubbing ( " Hotel Room " ), from the blues drip " Whats Goes Round " , " Ritalin " or "Donkey" , or - to consider the art of music as a benefit to climb fast and painless with surrealism to the square - a nice little grebe among the "shock absorbers" to live a low divine harmony which is to shoulder an even more majestic " Blessed polynomial ", and then along this band is the least fall in love unashamedly.

Claypool has seen well, the heirs have appointed them, and them, these three scoundrels zompettanti Londoners do not want to redeem themselves and forget to take the step "longer than the leg," the rest are "hot heads" and the show is in their DNA, and no one will make us shit! Thank goodness.
(Max Sannella)
Posted by HOTHEADSHOW at 03:35 No comments:

Posted by HOTHEADSHOW at 03:25 No comments: 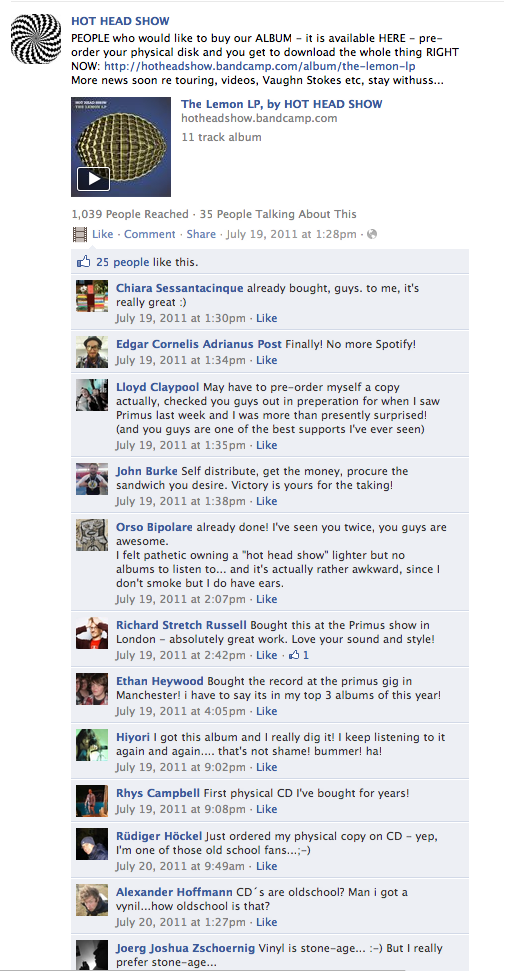 Posted by HOTHEADSHOW at 03:21 No comments:

Posted by HOTHEADSHOW at 03:09 No comments: 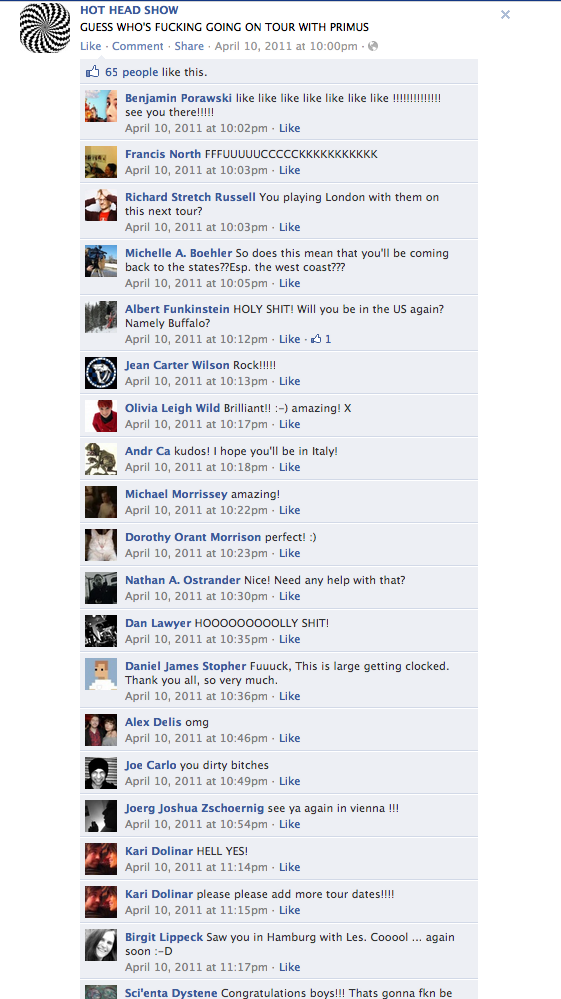 Posted by HOTHEADSHOW at 05:30 No comments:

Thank you Mr/Ms. Extremities for your gallant cinematography, your no-nonsense approach to video editing, and your evidently advanced sense of Bang.  And there were we thinking that evening at Wonderland was destined to pass unlogged into the midnight depths of forgotten history.  NOT SO says the man with the video-recording telephone.

Posted by HOTHEADSHOW at 15:39 No comments:

Everybody Do The Max Party Shuffle

Beatamax went and made a Banger.  If any of you are aware of a sassier tune ever having been recorded, we'd like to know about it.

Posted by HOTHEADSHOW at 13:17 No comments:

Posted by HOTHEADSHOW at 05:16 No comments:

HOT SHOW VINYL this way comes.  Seven inches of shiny black bang bang, carved and bagged and ready to rotate right there on your residential record rotator.  Test pressings have finally been APPROVED by the Show, and will be on sale from February 14th - the very date, by no small coincidence, that these two songs will become available on iTunes, Spotify, and whatever.

Here's a preview of the freshly remastered, omnispectrally superior recordings:


But what you should REALLY be riding right now is the REMIX lovingly choppastricated by A MECHANICAL MARINER:


AND! - the VIDEO will be up NEXT WEEK oh boy:
Posted by HOTHEADSHOW at 18:21 No comments:

It would seem that a young man known as RATFACE83 had his videorecorder trained on a couple of bangs in Nottingham.  Includes an HILARIOUS kick pedal mishap and strangely nautical vibe:

Posted by HOTHEADSHOW at 03:57 No comments:

Our bass player has written a Taoist song, our first foray into such forthright philosophising.  It is very nice.

Little Kitty by HOT HEAD SHOW
Posted by HOTHEADSHOW at 08:04 No comments: 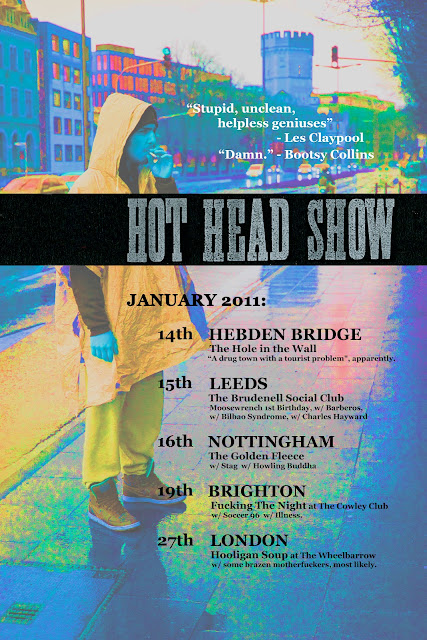 To make this poster we took a photo of Vaughn taken by Barry before our show in Koln last year.  Max leaped with ferocious enthusiasm immediately to the Hue/Saturation controls, and tweaked those electromagnetic vibrations for a good 45 minutes whilst Jordan and Vaughn were in the other room learning to simultaneously sing and play Jordan's new tune, which right now is called Hello Doctor.  On returning to the Poster Issue, after some deliberation 40pt was ultimately proved ideal for the events themselves, though the cities and dates would require an 80 caliber Georgia Bold, whilst a mere 36pt seemed more than sufficient for explanatory details.  The band then took an unsettling communication from the Manchester promoter, from which it was decided that the Manchester date on the 18th could potentially end up being woefully unfun, and should probably be cancelled.  But then, to the unconcealed delight of all present, it was revealed that five dates on a poster actually looks better than six dates on a poster.  Amid wildly affirmative cries and buoyant libations, the Quality slider was slid all the way to "highest"on the jpeg exporter, and the conversation drifted briskly elsewhere.
.
Posted by HOTHEADSHOW at 11:34 2 comments: