After many happy downloads from the Soundcloud player, we've now moved the Lemon EP over to Bandcamp, which we're told is what all the hepcats are doing.  You can still download it for free, you just need to join our mailing list, which is really a win-win from your point of view.
Soundcloud.com/hot-head-show is still the place to go for live tracks, rehearsal jams and other obscurities, which will still be downloadable for nothing.

Posted by HOTHEADSHOW at 09:38 No comments:

Posted by HOTHEADSHOW at 18:08 No comments:

Look what Barry done dug up from the bottom of his suitcase... 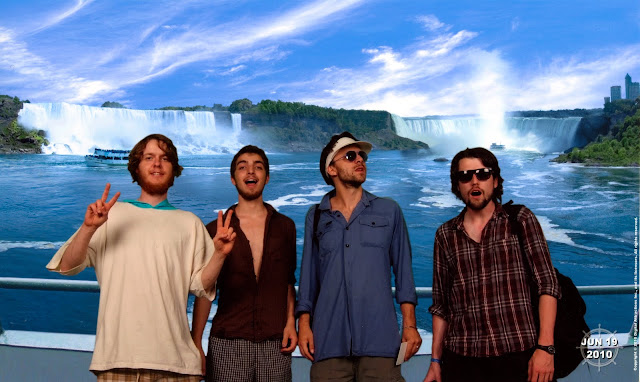 Posted by HOTHEADSHOW at 06:02 No comments:

Thought you might enjoy some highlights of the various bits and pieces we were accused of whilst in the states:

FrantikMag.com     02.06.10
"It takes a lot to surprise people in London.  Nonetheless, Hot Head Show are apparently turning heads with songs that Time Out London could only describe as "genuinely fresh" and "appealingly bizarre".  Les Claypool, the muso demi-god responsible for plunging his mighty fingers into the confused bubble & squeak of London's burgeoning avant-rock scene and plucking forth this odd trio, describes them as "stupid, unclean, helpless geniuses".  Having spent the first part of the year parading Hot Head Show around Europe, Claypool brings them now to the US for their first stateside tour."
Pittsburgh City Paper     03.06.10
"Opening for Claypool at Greensburg's Palace Theatre tonight is a new act worth special notice: Hot Head Show, a London-based trio whose erratic grooves and twisted lyrics combine elements of Captain Beefheart, deranged ska, The Birthday Party and Tom Waits. To quote singer Jordan Bennett's monologic lyrics, "Run for the early train that gets you there before the rush / 'Cause then the entrance fee won't sting so much."
Tiny Rager blog     08.06.10
"It is a wonder that Les Claypool doesn't understand the crowd's reaction to his music when he invites groups like this to open for his show.  Personally, this was just a loud 30 minute mess used to get us rowdy.  There was a pretty bass solo at one point but other wise the music was a headache.  An utter headache.  After reading about them, their reviews are actually positive... UGH!  I am sorry but I really hate being screamed at by a band on stage."
Wall Street Journal .com     04.06.10
"Hot Head Show was the ideal opening act for Claypool and Co. The trio makes funky, zig-zaggy rock, though it tosses blues and ska into the blender as well, with lyrics from the Zappa/Claypool school of sophomoric humor. If you didn't make it to Montclair, the double-bill plays the House of Blues in Atlantic City on Sunday and the Brooklyn Bowl on Tuesday."
The Sonic Abyss blog     07.06.10
"Every once in a while a band comes along with a sound so insane (yet so undeniably well done and totally pro) that one's head just spins in wonderment until you realize you can do nothing but laugh, enjoy, and go with the flow... I’ve never heard anything quite like this before and I really can’t compare it directly with any one band. Absolutely one of the most fun bands I’ve ever heard in my life.  As esoteric as any Frank Zappa album ever was (albeit with simple guitar/bass/drums instrumentation)... slips from garage to ska to twisted rock to avantgarde effortlessly, with one of the most fun and playful bass guitars I’ve ever heard and sharp British wit.  No kidding…this is a fiercely original sound that has to be experienced.   Guaranteed to make you smile, confuse and confound you.  And the musicianship is just ludicrously top notch.  I’m amazed at how addicting this sound is."
Pittsburgh Music Report     11.06.10
"The opening band Hot Head Show did not impress.  The vocals were near indecipherable, they constantly started / stopped, and changed pace throughout the song.  I had a hard time getting in to the groove."
AssociatedContent.com  04.06.10
"If the generic, bland sounds of American Idol are getting you down about the state of the modern music scene, then check out the wildly innovative music of Hot Head Show. This unique trio from London, England is never going to end up on any Top 40 playlist, and that's only one of the things that makes them so great. Hot Head Show plays music that defies any easy description, taking cues and influences from diverse sources such as the blues, ska, alternative rock, funk and psychedelia. Thrown together in a crazy musical stew and seasoned with witty lyrics and terrific vocals, their music will get your feet moving at the same time your brain is trying to process just what exactly you're hearing... at a time when mediocrity and blandness seem to dominate the music scene, it's wonderful to hear a band that just goes out there and plays their own kind of music."
Posted by HOTHEADSHOW at 14:14 No comments: